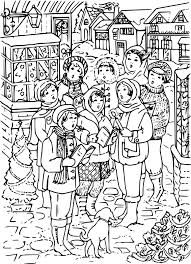 A Collection of Dorset Carols, edited by W. A. Pickard-Cambridge, was published in London 1926 by A. W. Ridley & Co. The editor was a classics don at Worcester College, Oxford, who was well known in his field. He was also a published composer, Novello having issued a number of his sacred motets and secular songs. He left in manuscript some substantial organ works, the last of which he describes as his Opus 68. If one assumes that he could perform his own compositions, his was an organist of considerable ability.

The anthology was based on a number of manuscripts collected by his father, who had been a minister at a Dorset parish. The present edition makes use of MIDI files of the carols transcribed by Douglas D. Anderson. He has kindly made them available at the Hymns and Carols of Christmas website, where the preface to this anthology and images of the original pages may also be found. The editor is grateful to Douglas Anderson for releasing his transcriptions to the public domain. Nonetheless, this edition is based primarily on the original printed copy. According to Anderson's notes, the original manuscripts were destroyed during WW II, so Pickard-Cambridge's references to them are not quoted. In some cases it has been possible to confer his editions with printed sources, and other manuscript comparators are available for some of the carols.

The carols form part of the West Gallery genre, and much research into the genre has taken place since 1926. The present edition has been made in the light of such research, which has enabled conjectures to be made about the nature of the lost manuscripts. The purpose of the present edition is to publish practical editions of these carols based on these conjectures, in open score, and in a style better adapted to modern West Gallery practice.

Revision of Pickard-Cambridge's work should not be taken as any criticism. Pickard-Cambridge has edited the manuscript sources in accordance with the style of hymn books of his time, and it is fortunate indeed that these carols, or versions of carols, survive at all. The music is laid out in short score for keyboard accompaniment. Marks of expression and metronome marks have been added. Where the underlay of the text in verses after the first causes rhythmic stress to fall in what he considers to be the wrong place, he adjusts music and text accordingly, in some cases writing out the music in full again for one or more subsequent verses.

All the foregoing features are unlikely to have been present in the manuscripts, and have been omitted in the present edition. New suggested metronome marks are added, as the original ones added seem on the slow side for current taste. In some cases it has been possible to attribute text or music, though much of both remains anonymous. I shall be pleased to hear from anyone with further knowledge of the authorship of texts or music.

According to Rollo Woods Pickard-Cambridge "admitted that he rewrote the harmonies pretty freely". No large-scale attempt has been made to restore what might have been the original harmonies, but emendations have been made, and fall mainly into the following categories:

With the exception of a few minor underlay adjustments, all emendations are noted.

One alteration which Pickard-Cambridge may well have made in some instances, but which is impossible to detect, is a change from tenor-led to soprano-led part allocation. Manuscripts vary considerably in this respect, with many tunes or versions of tunes appearing in both formats. There is a single tenor-led setting (34b) in his edition, but many of the other carols were probably tenor-led.

Two passages of Pickard-Cambridge's edition have been omitted entirely. There is an independent glockenspiel part for #4, and a double canonic version of #6. Both these passages seem so far removed from known West Gallery practice that they have not been included. Those who wish to perform them are referred to Anderson's website given above.

Click on any title to download a Sibelius file. If you are new to Sibelius or have any trouble with these files please look at the relevant page of Questions and Answers for more information.

A full set of files for each piece, including pdfs and versions with keyboard accompaniment, may be found on the Scores page.