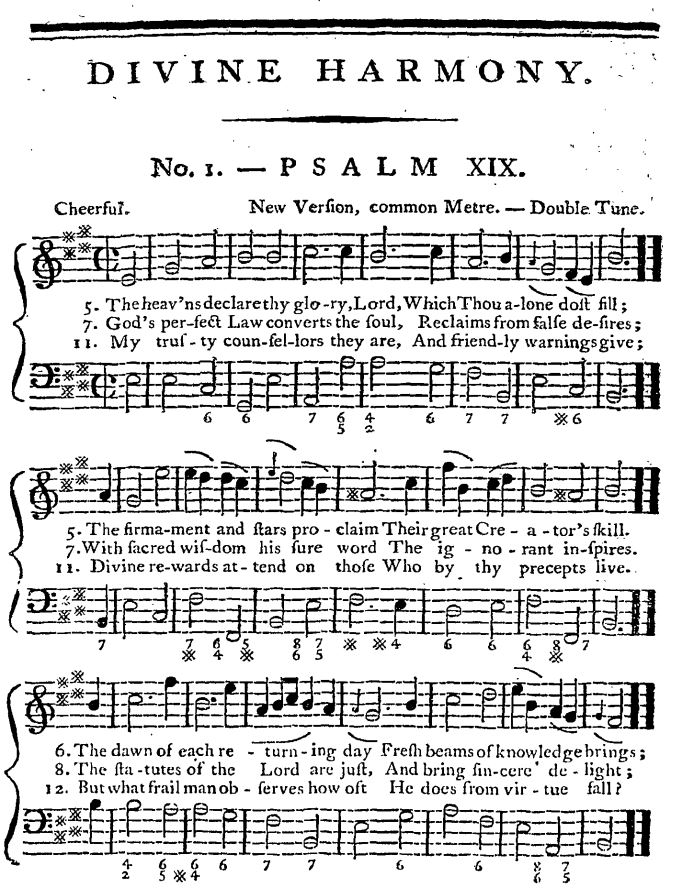 The first modern transcription of the hymns of Phocion Henley (1728-64) was carried out by Robert Barr in the late 1990's. Barr was then a member of London Gallery Quire, which at that time rehearsed in the church where Henley had been rector.

Phocion Henley was born in 1728 in Abbots Wotton, Dorset. He matriculated 7th May, 1746 at Wadham College Oxford, and took his BA degree 14th February 1750. He received an MA from Kings College, Cambridge in 1753. He was appointed rector of St. Andrew by the Wardrobe on March 8th, 1759, and died on August 29th 1764, reportely after contracting a fever while visiting a sick parishioner.

Henley studied music as an undergraduate. He published a collection of six hymns titled The Cure of Saul, date unknown. These hymns were published in 1798 as Divine Harmony edited by John Page. An anthem by Henley, Hear my Prayer, O God, and hide not thyself is also included in Harmonia Sacra, a three volume collection published by Page.

According to the Dictionary of National Biography, Henley was a nephew of Robert Henley (Lord Northington), who was appointed Lord Chancellor in 1761. The Henley family owned lands in Dorset and elsewhere in the south west, and collected gound rents at Lincolns Inn Fields. The uncle is hardly mentioned in histories of the period except for an anecdote about his drinking. The King reportedly remarked to him that he liked his glass of wine. Northington denied it, saying he much preferred a bottle.

If Northington had any influence on Henley's appointment to St. Andrew, it appears to be a very modest boon. It was known as one of the poorest of the city parishes, and one of the last, if not the last, to have an organ (in about 1800).

Henley's other known compositions include anthems, Anglican psalm chants, one of which appears in The Cathedral Psalter, the set piece The Cure of Saul, and some secular instrumental music. Henley's unusual forename, also spelt Phocyon, derives from a Greek word meaning dolphin. No explanation for this curious nomenclature has been found.

The present edition is based on Barr's transcriptions. I have conferred it with the sources available in the British Library, which are given in the following table. Abbreviations appear below.

The texts are mostly metrical paraphrases of verses of psalms, with the exception of #21, taken from the Benedicite, and #23 and #24, which are hymns. Authors are attributed in the table below. With the exception of #22 the texts are free from passages where voices omit syllables. Text repetition occurs only in five tunes. In #2, #3 and #5 it results from the whole of the second half of the tune's being marked to be repeated, a common 18th Century feature.

In #21 the repetition is of two syllables in lines 3 and 6 of the 886886 metre text. In verse 5 line 3 this would lead to the singing of "Whose inf-, whose influence ...", and the setting of verse 4 line 6, "Hymns of, hymns of eternal praise ...", is not much better. Such setting is so much at variance with Henley's general approach as to lead to doubt whether the text in $21 was Henley's own. The tune would serve well for an 888888 metre text, with no underlay problems.

#22 presents even greater underlay problems. The top voice omits the first syllable of line 1 and the first four of line 2, and all three voices repeat the last four syllables of line 4. This leads to several underlay problems, and suggests once again that $21's text is not that chosen by Henley.

The text to Henley's 22nd item is by Rev. James Merrick, papraphrasing Psalm 41. Merrick's psalter was published in 1765, a year after Henley died, so presumably Henley had some private access to Merrick's work. Or perhaps Page [$2] substituted the Merrick version in Henley's original.

It is thus possible that the other Merrick text (#23) was not Henley's choice; and perhaps other texts also were selected by Page.

The atypical style and scoring of #22, together with its present text, suggest that its intended usage was different from that of the other 23 settings. It may have been intended for charity children, who were expected to lead music for worship in recompense for their free education. The texts of such settings often related to beneficence, as in the present case.

The tunes are uniform in style. With the exception of #22 they are plain tunes, in the 18th Century sense meaning that each foot of the metrical text is set by one bar or half bar of music, and that all four voices sing throughout, with no texture thinning or contrapuntal imitation. In another sense the tunes are far from plain, both air and harmony being florid, with much use of appoggiaturas and similar decoration.

There is no indication of any instrumental accompaniment for either melody or keyboard instruments. No organ was available at Henley's own church, so the settings may have been intended for use there. Plain tunes are suitable for singing by a congregation, but the florid style of Henley's airs betokens a fairly sophisticated one. A further indication that these tunes were intended for use by a city choir is that the airs are clearly intended to be sung by the soprano part. In Henley's lifetime West Gallery music intended for use in town and country churches usually had the air in the tenor, but these settings are unsuitable for that style of rendition.

Although Henley eschews the fuguing style, which was so popular with less sophisticated composers, elements of it may be seen in his part writing. In #2 the soprano phrase from bar 7 note 1 to bar 8 note 1 is echoed successively in bass, alto and tenor voices. A comparable echo occurs in #21 in bar 17 soprano and bar 18 tenor. Other such examples may be found. These subtleties benefit from sensitive performance.

The present editions are practical rather than critical, and intended for performance. To this end the following procedures have been adopted:

# gives the number assigned in $2; other abbreviations appear below.

Click on the Title to download a Sibelius file of the piece. If you are new to Sibelius or have any trouble with these files please look at the relevant page of Questions and Answers for more information.