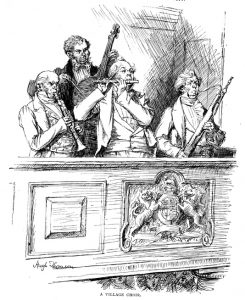 In 1746 Michael Beesly published in Oxford:

A Collection of 20 New Psalm Tunes

Sold by Ed Doe at Oxford . Jos Wimpey at Newbury

This small unassuming book was a seminal publication, in that few fuguing tunes had been published beforehand, and that in the decades after its publication fuguing tunes became common in many West Gallery publications. Their popularity is attested by their frequent appearance in manuscript collections. The fashion for them later gradually waned, though tunes in fuguing style were still being published by composers such as Thomas Clark well into the 19th Century.

Much information about Beesly's publication is to be found in Nicholas Temperley’s article The Origin of the Fuging [sic] Tune, (Royal Musical Association Research Chronicle No. 17 (1981), pp. 1-32). I have leant heavily on that article in writing this one. Temperley examines such external evidence as exists relating to the origin of Beesly's tunes. This article attempts to draw conclusions from internal evidence.

The tunes were not all new. Two of them (HTI 1143 and 1166a) had already appeared in 1725 publications, the former attributed by Temperley to Arthur Bedford (1668-1745). The other eighteen appeared in Beesly in print for the first time. With three exceptions they are fuguing tunes, and some of them show a certain uniformity of idiom. Beesly simply claims to have compiled and published them. He is not known to have been a composer.

The collection is of particular interest because seven of the tunes were re-published in 1753 in the first edition of William Knapp's New Church Melody and in all subsequent editions. The following table lists the tunes, in order as they appear in the book. OV and NV refer to the Old Version and New Version of the metrical psalms respectively. Click on S for a Sib(elius) file of the tune, or on pdf for a pdf file. The HTI column lists the Tune Numbers in Temperley's Hymn Tune Index (Oxford, 1998).

Under GB and USA respectively are listed the number of times each tune was reprinted up to 1820 in those countries, other than in publications by Beesly and Knapp themselves. The column headed Knapp gives the names of the tunes as they appear in New Church Melody, and by which they are more commonly known.

The 20 tunes may be divided into five loosely defined groups. Pss 5, 11, 25, 98 and 145 share a common musical structure. Each has a fuguing section in each of two balancing sections, in which the voices usually enter in the order SATB and BTAS respectively. (Ps 98 reverses this order). These and those of the second and third groups are all composed in a manner which suggests a fair grasp of musical theory. Pss 11, 25 and 145 include cadential suspended dissonances, a common feature of contemporary cathedral music, but one rarely found in the West Gallery genre. All except Ps 145 appear in Knapp's publication.

A second group is formed by those fuguing tunes which do not share the above structure, but do show similar evidence of compositional skill. These comprise Pss 1, 27, 40, and 57 OV. With the exception of Ps 57 OV these have one fuguing section each. Ps 57 OV has three, and does not conform to the pattern of the first group, being in three parts, and apparently soprano led, until near the end. Ps 27 is the only setting with a known composer, Arthur Bedford (1668-1745).

A third group are the outliers, Pss 107, 108 and 136. It is a matter of opinion which tunes can be said to fall within the category of fuguing tunes. I consider these three to fall outside that category. (Ps 92 is perhaps on the borderline.)

Fourth and fifth groups are formed by Pss 9, 92, 128, 146 and 148, which show evidence of unconventional composition technique, and are rich in unresolved discords and/or parallel fifths and octaves; and Pss 57 NV, 133 and 150 which show similar unconventional technique, and also show misbarring, i.e. the bar lines do not occur before the strong beats of the music. Pss 9, 92 and 136 share the feature of a medial cadence into the relative minor, which could be the fingerprint of a particular composer. Ps 136 had been published previously to Beesly's edition.

These groupings suggest two conclusions. Firstly, the tunes seem to be the work of several composers. It is tempting to conjecture that those of the first group are the work of one composer. Since four of the five tunes occur in Knapp's publication, that composer could be Knapp himself. So did Beesly receive these tunes from Knapp in or before 1746, or did Knapp lift them from Beesly’s selection and include them unattributed in New Church Melody? The differences between Beesly’s and Knapp’s versions are very small by West Gallery standards. Most are small rhythmic changes, which in are so common in general as to be barely worth mentioning. But there are two clear wrong notes in Beesly which are corrected in Knapp. Temperley writes on p. 13 of his article:

It looks very much as if Knapp took them [the seven named tunes] from Beesly without acknowledgement, a procedure that was not at all unusual amongst country psalmodists.

Another possibility is that when Beesly was collecting fuguing tunes for his publication, he approached Knapp and commissioned or requested some or all of the tunes which are common to both their collections.

A second conclusion is that while Beesly himself might have been the composer of some tunes in the third and fourth groups, he is unlikely to have composed any of the others. Such a composer would surely have noticed the misbarring at least, and corrected it.

The frequency with which tunes were reprinted, as shown in the above table, seems to show that compositional skill was not necessarily highly regarded by those selecting tunes for republication. Ps 25 seems a satisfactory setting which might well have deserved more exposure.

On the other hand, of all 20 tunes Ps 150 is probably the one which shows the greatest disregard for convention. The edition as here presented rebars the piece, but leaves the harmony unchanged. That in the second half seems to belong more to the 20th century than the 18th. When James Evison reprinted the piece under the name Mepham in the second edition of his A Compleat Book of Psalmody (Edition 2, London 1751) he made some attempt to improve the harmony of this passage, and his alterations were copied in later publications. Nonetheless, it seems remarkable that such sounds should have been seen as worthy of repetition.

On p. 17 of his article Temperley writes of two of Beesly's tunes:

Their oscillation between extreme but meaningless dissonance and equally meaningless blandness indicate that Beesly ... was not in control of his harmony, and did not know how his music would sound.

It appears that Beesly, not unlike certain modern musical entrepreneurs, though not particularly musical himself had an eye for a popular trend, and published a book which helped to establish one of the most charateristic features of the West Gallery genre.