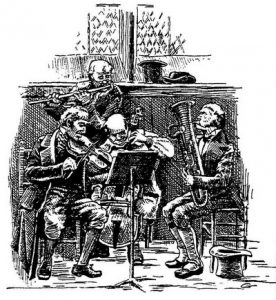 Chanting tunes are a part of the West Gallery genre that receives scant attention. Apart from London Gallery Quire, I don’t know of any quire that has any in repertoire, and they tend not to figure at West Gallery Music Association singing weekends and similar gatherings.

The chanting tune was developed as means of enabling local quires to sing prose psalms and canticles. The Anglican psalm chant was the usual manner in which prose psalms were rendered in the cathedral style. But Anglican psalm chanting is an art, which entails the ability of singers to fit phrases of several, sometimes many, syllables to a single note in the manner of speech rhythms, and then to change notes together at the right instant. Then as now many local quires found this art beyond them. The metrical psalms developed as one means of solving this problem, and proved a popular option. But chanting tunes remained an alternative.

Uriah Davenport’s chanting tune for the Magnificat (RM051) from The Psalm Singer's Pocket Companion (London, 1755) is a typical exmple. As is usual in the form, tenor and alto voices alternate in singing verses of a psalm or canticle to a simple air, the basses singing throughout. The tenor and alto airs are then repeated for each pair of verses. Where there are too many syllables for the air, it is stretched by making one of the notes into a reciting note, as marked in the example. Only at the end is there four part harmony, usually just for the doxology, so the sopranos have little to do, and often their part may be omitted without harming the harmony. In some later chanting tunes a soprano line makes up three part harmony in the tenor sections, leaving the alto sections still in just the two parts.

Ruth Wilson, in Anglican Chanting in England, Scotland and America 1660-1820 (OUP 1996), explains the alternation of the air between alto and tenor voices as follows:

The spatial and musical effect of chanting a prose psalm antiphonally, or singing a verse service with alternating choir and solo verses, most likely inspired the parish alternatim setting. The antiphonal effect had to be created in some other way, however, for the divisions of a cathedral choir were rarely within the bounds of practical considerations for … parish choirs. Even if a parish choir was seated in a separate gallery they would still be performing in a body, since the singing seats would be together.

Chanting tunes appear in many of the printed compilations of the first half of the 18th Century, such as John Chetham’s A Book of Psalmody (London 1717) and Robert Barber’s The Psalm Singer’s Choice Companion (London 1727). They are rarely found in later compilations; nor in manuscripts, which leads one to suppose that the form never competed effectively with the metrical alternative. Some chanting tunes were melodically rather uninspiring. And in some cases only one pair of verses was printed, leaving quires to work out subsequent underlay for themselves, which rather defeated the chanting tune's purpose.

Joseph Key’s four chanting tunes appeared rather late in the chanting tune’s history, and breathed new life into an otherwise moribund form. Key’s settings of the Mattins canticles, the Te Deum (RM248) and Jubilate Deo (RM249), appear in the first of his four publications Eight Anthems on Various Occasions (Nuneaton, 1773), and the Evensong canticles Magnificat (RM050) and Nunc Dimittis (RM045)  appeared in his fourth (posthumous) compilation Five Anthems and Four Hymns (London 1790). Despite the distance in time between the two publications, the idiom of the four settings is similar and noticeably different both from Key’s other settings, and indeed from any other works of the period. Stylistically they stand alone, and may well have been composed at the same time.

The attractiveness of Key’s four settings results from his having chosen longer and more florid pairs of airs than in earlier chanting tunes. This enables him largely to avoid the tedium of lengthy passages on a single reciting note. Where the number of syllables in a verse is short, the setting is often melismatic, that is to say with several syllables to a note. And Key is much more ready than earlier composers to adapt his airs to the text, rather than sticking fairly rigidly to the airs of the first two verses and forcing the text to fit them.

Key’s Magnificat and Nunc Dimittis form a useful pair, which can be strongly recommended to any quire with an Evensong to sing. The repeating structure makes them easy to learn, while presenting the impression of a more elaborate through-composed setting. Rather less serviceable is the Te Deum setting. Although Key departs from the chanting tune form with specially composed music for the text “Holy, holy, holy”, the fourteen repetitions of his two airs to accommodate the remainder of this lengthy canticle perhaps defeat even Key’s ability to provide the chanting tune with sufficient variety.

The most attractive of the four settings is the Jubilate Deo. Key enhances his melodious setting of the text with a florid independent bass part, probably intended for a bassoon, but performable on cello or serpent. Other anthem settings by Key have instrumental basses, but nothing quite as rhythmically exciting as this one. Of Key’s four chanting tunes, this is the one most likely to be found in manuscripts. Although quires are rarely called upon nowadays to sing Mattins, the Jubilate serves as a useful and easily learnt anthem.

A full set of files for all Joseph Key pieces may be found on the Scores page.