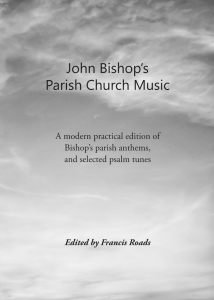 John Bishop (b. 1665) was organist of Winchester College from 1695 to 1729, and of Winchester Cathedral from 1729 to 1737, the year of his death. He composed some music intended for cathedral performance (1), but he also published two books of music intended for parish choirs. I have made an edition from sources in the British Library (BL) of the 51 psalm and hymn tunes in these books. The anthems are the subject of a separate article.

A set of New Psalm Tunes in Four Parts: containing Proper Tunes to all the different Measures of the Psalms which are to be found in the Old, or any of the New Versions, or Supplement: With variety of Tunes for the most common Measures: contrived within a moderate Compass, for the ease of the Voice, and may be sung in 1, 2, 3, or 4 parts, with a Figured Bass for the Organ; and a Table shewing what Psalms are proper to each Tune.

With four short anthems in four parts, for the Delight and Improvement of all who are truly Lovers of Divine Music. Design’d for the use of St. Laurence Church in Reading; and are taught by Tho. Batten.

By John Bishop, Organist of the Colledge [sic] at Winton.

Printed by W. Pearson, for the Author, and Sold by J. Walsh, at the Harp and Haut-boy in St. Katherine street, J. Hare near the Royal-Exchange, and W. Colson in Winchester. Price 1s. 6d.

An image of the title page is available here. The book was typeset with the four parts printed separately on facing pages for the strophic settings, and on successive pages for the anthems. C clefs were used for all three upper parts. It includes 33 tunes, mostly plain, for metrical psalms, and four anthems.

Second and third editions were published in 1722 (3) and 1730 (4) respectively, in the form of separate part books, when seven more tunes and three more anthems were added. The reference to St Laurence’s Church, Reading in the advertisement was omitted. Publication details for these editions are somewhat different, as are the prices: 1s. 6d., 2s. 0d. and 2s. 6d. for the three editions respectively.

Bishop published A Supplement to the New Psalm Book (SBP) (i.e. the New Version of Tate and Brady) in 1725 (5), with a second posthumous edition in 1770 (6). The first edition was issued typeset in score, and included 11 psalm tunes and six anthems. In the advertisement to the latter book the author writes,

“I have chose to put this in Score, believing it to be of great Use and Benefit to the Performers to have all the Parts before ’em, that they may see where each Part stops, and where it joyns again with the rest, by which they will know when to come in. I have also put the Treble-part in the Gsolreut-Cliff; as being generally better known than the other.”

The present editor is grateful for this decision, as the part books of SBT have inconsistencies which present editing problems. The 1770 edition was engraved, and the opportunity was taken to make a few corrections.

The subjoined table gives details of the 51 psalm and hymn tunes in the various editions. Detailed commentary follows the table:

Click on the Sib to view and hear the music from a Sib(elius) file. If you are new to Sibelius or have any trouble with these files please look at the relevant page of Questions and Answers for more information. Clicking on Midi and pdf brings up downloadable MIDI and PDF files respectively.

A Sett of New Psalm Tunes

A Supplement to the New Psalm Book

In editing these tunes I have endeavoured to produce practical editions. I present them as published, without keyboard accompaniment. In Bishop’s time they were probably usually sung unaccompanied, but such straightforward music lends itself to all manner of performance. I have added extra verses to the single line of text included by Bishop, in most cases following a common custom of the period by including a total of four verses.

I have corrected what I consider to be errors which have occurred either at the typesetting or some other stage; these are all noted. Most of the consecutives I have left unaltered but noted. I have added suggested metronome markings enclosed in editorial square brackets.

The tunes in A Sett of New Psalm Tunes

In SPT all the tunes except #35 are plain tunes. With a one exception, there is no melismatic writing, and generally each foot of text is matched by a bar of music. In #31 Bishop allows himself a melisma on the word "eternally", an isolated example of word-painting. And in #40, a setting of the metrical Te Deum, Bishop repeats the text "holy"; a repetition which causes underlay problems in subsequent verses.

Tunes #28 and #33 are reworkings of the same musical material, and it is unclear which came first. #33 is the only hymn setting in the compilation, and appears spearately from the psalm tunes, at the end after the anthems. It is in Double Common Metre. #28 sets Psalm 130 Old Version, which is in the then unusual 7676 metre, of which only one previous example is listed in the HTI (7). It is therefore perhaps more likely that #28 is the adaptation.

#35 is in the form which has come to be known as a relay tune. The four voices in turn sing a line of text unsupported, after which there is a chorus for all four voices repeating the last two lines of text. In the first strain of the chorus the soprano voices repeat the music which they previously sing unsupported. (This device is similar to that later employed in some relay tunes by William Knapp (c1698-1768), who sometimes uses the first strain of the chorus bass as the prior unsupported bass passage.) I have been unable to find any similar relay tune published before 1722, the date of SPT's second edition. It may then be that Bishop invented what was to become a popular form for West Gallery tunes.

Bishop's part allocation is always clear. Most of the strophic settings have the air in the tenor, in contra-distinction to his anthems, in which the air is in the soprano. The HTI lists all these tunes as having tenor air. However, I consider this allocation questionable in the case of #35. As mentioned above, the soprano of #35 repeats a strain in the chorus, and later cadences onto the tonic. The tenor has more the character of a harmony part, and cadences onto the mediant, which is unusual for a West Gallery air. (The tenor of #37 is the one other example of a tenor air which cadences onto the mediant, but in this case it is fairly clear from the general structure of the tune that the air is in the tenor.)

19 of the 40 tunes in SPT are in minor keys, which is by no means unusual for West Gallery music of this period. What is unusual is that 12 of them end with a tièrce de Picardie (a major final chord in a minor key setting). The remaining minor tunes end on open fifths or bare ocatves. The tièrce de Picardie is rarely found in other West Gallery settings, though it was occasionally used by Joseph Key (d. 1784).

There is, however, a surprising feature of music which is generally so well written, which is the frequent appearance of forbidden consecutive intervals, noted in the editions. To what extent these are accidental is unclear, but in other respects Bishop's technique usually obeys the conventional canons of composition.

In my opinion these apparent blemishes by no means spoil the overall effect of these tunes, which with eight exceptions were republished by other compilers. #2 and #7 appear to have been particularly popular, though it is hard to identify any special qualities of those particular tunes, nor of those which were not selected by subsequent compilers.

The tunes in A Supplement to the New Psalm Book

Only tunes #41-46 are by Bishop. All except #45 were later republished by other compilers. Bishop describes his compilation as "Consisting of ... six new psalm tunes, after a different manner." Unlike most of those in SPT, none is a plain tune. All have the feature of textural contrast by including passages in just one, two or three parts, before a final full passage. This feature was widely used in subsequently published tunes, and Bishop's usage seems to have been one one of the earliest. It is perhaps surprising that he did not include any more relay tunes similar to #35 in SPT.

#43 and #44 feature passages for unsupported bass voices which is later repeated as the bass of a fully scored final strain. As mentioned above, this technique was later used by William Knapp in some of his relay tunes, thus combining it with the innovatory structure of #35. It is tempting to conjecture that Knapp was familiar with Bishop's tunes, and chose to combine the two techniques.

As with the SPT tunes, the HTI lists these six as having the air in the tenor part. There is difficulty in assigning the air-bearing part, as Bishop's style of textural contrast causes the air to move freely between the parts. However, all these tunes end with a fully scored final strain, and here the air may be identified as either soprano or tenor. On this basis, I consider that the air in #41, #42 and #46 is in the soprano part, and that the HTI is in error in this respect.

Perhaps coincidentally, the three tenor-led tunes #43-45, all have the text of the second two lines of each verse repeated. This feature occurs in the SPT tunes only in the case of #35.

Tunes #47-51 appear on a folio at the end of the 1725 edition, which appears to have been copied from another publication. Page numbers [9] and [01] (sic) appear, following the preceding P.56. All had been previously published, but it has not been possible to find in the HTI any publication in which all five appear. They were omitted from the 1770 edition of SPB.

All are plain tunes. None has any similarity in style with Bishop's tunes. Four are in two parts, #50 being in three. Tune names are given, but no indication of text. Suitable texts mentioned in other publications have been added in the editions to enable performance.