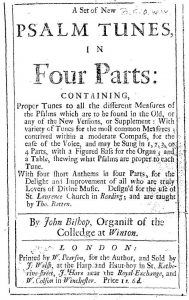 John Bishop (b. 1665) was organist of Winchester College from 1695 to 1729, and of Winchester Cathedral from 1729 to 1737, the year of his death. He composed some music intended for cathedral performance (1), but he also published two books of music intended for parish choirs. I have made an edition from sources in the British Library (BL) of the 13 anthems in these books. The psalm and hymn tunes are the subject of a separate article.

A set of New Psalm Tunes in Four Parts: containing proper Tunes to all the different Measures of the Psalms which are to be found in the Old, or any of the New Versions, or Supplement: With variety of Tunes for the most common Measures: contrived within a moderate Compass, for the ease of the Voice, and may be sung in 1, 2, 3, or 4 parts, with a Figured Bass for the Organ; and a Table shewing what Psalms are proper to each Tune.

With four short anthems in four parts, for the Delight and Improvement of all who are truly Lovers of Divine Music. Design’d for the use of St. Laurence Church in Reading; and are taught by Tho. Batten.

By John Bishop, Organist of the Colledge [sic] at Winton.

Printed by W. Pearson, for the Author, and Sold by J. Walsh, at the Harp and Haut-boy in St. Katherine street, J. Hare near the Royal-Exchange, and W. Colson in Winchester. Price 1s. 6d.

It was typeset with the four parts printed separately on facing pages for the strophic settings, and successive pages for the anthems. C clefs were used for all three upper parts. It includes 33 tunes, mostly plain, for metrical psalms, and four anthems.

Second and third editions were published in 1722 (3) and 1730 (4) respectively, in the form of separate part books. Seven more tunes and three more anthems were added. The reference to St Laurence’s Church, Reading in the advertisement was omitted. Publication details for these editions are somewhat different, as are the prices: 1s. 6d., 2s. 0d. and 2s. 6d. for the three editions respectively.

Bishop published A Supplement to the New Psalm Book (i.e. the New Version of Tate and Brady) in 1725 (5), with a second posthumous edition in 1770 (6). The first edition was issued typeset in score, and included 11 psalm tunes and six anthems, one of which is by Bishop’s predecessor at Winchester Cathedral, Vaughan Richardson (1670-1729). In the advertisement to the latter book the author writes,

“I have chose to put this in Score, believing it to be of great Use and Benefit to the Performers to have all the Parts before ’em, that they may see where each Part stops, and where it joyns again with the rest, by which they will know when to come in. I have also put the Treble-part in the Gsolreut-Cliff; as being generally better known than the other.”

The present editor is grateful for this decision, as the part books of the former publication have inconsistencies which present editing problems. The 1770 edition was engraved, and the opportunity was taken to make a few corrections.

The following table gives details of the 13 anthems in the edition. # gives editorially assigned numbers for identification. Numbers under 1st ed. etc. are page numbers.

Click on the title to download a Sib(elius) file. If you are new to Sibelius or have any trouble with these files please look at the relevant page of Questions and Answers for more information.

The anthems are all highly suitable for choirs of moderate attainment without keyboard accompaniment. They are quite short. There are no great technical challenges, yet the music is melodious, sets its texts sensitively, and is satisfying to sing. Two (#s 2 and 12) are often found in subsequent anthologies, frequently unattributed. (The composer of the latter, Vaughan Richardson, was Bishop's predecessor as organist at Winchester Cathedral. One other anthem by Richardson, Hear my prayer, O Lord, which may have been intended for parish choirs survives in manuscript (7)

The style of these anthems is fairly uniform. Often there is a chorus for all four parts, which occurs two or three times, separated by verse sections for one or two voices. Even where this pattern is not followed there is usually contrast between fully scored passages and those of reduced texture. Such sections often consist of a passage for two voices imitated by a similar one for the other two. What in later music would be described as fuguing sections are represented by passages in which single voices sing a phrase in succession at different pitches, unsupported by the other voices.

A surprising feature of music which is so well written, and by a trained musician, is the frequent appearance of forbidden consecutive intervals. To what extent these are accidental is unclear, but in other respects the technique usually obeys the conventional canons of composition. In my opinion these occurrences by no means spoil the overall effect of these anthems.

A puzzling feature is the assignment of the air. In Bishop’s psalm tunes the air is in the tenor, but in the anthems it appears to be in the soprano. In two cases (#s 2 and 7) examination of the music out of context might lead one to suppose that they had the air in the tenor, but it seems unlikely that Bishop would have made an exception for these two.

Many anthems of this general character were published in the early 18th Century, though these were some of the earliest. A Sett of New Psalm Tunes is only the second such collection of parochial anthems to be mentioned by Temperley(8). They appear to have had an influence on the development of the genre. A possible instance of direct influence may be seen in bars 50-59 of # 11, which is remarkably similar to bars 60-67 of William Knapp’s anthem Be thou my Judge, published 13 years later in 1738.

In editing these anthems I have endeavoured to produce practical editions. I present them as published, without keyboard accompaniment. In Bishop’s time they were probably usually sung unaccompanied, but such straightforward music lends itself to all manner of performance.

I have corrected what I consider to be errors which have occurred either at the typesetting or some other stage; these are all noted, as are variations between the editions. Most of the consecutives I have left unaltered but noted. I have added suggested metronome markings and dynamics enclosed in editorial square brackets. In accordance with Roding Music house style I add dynamics below the staves, where they occupy less space, and are less likely to be ignored.

I commend these anthems not only to West Gallery quires, but also to mainstream church choirs, for whom they are as eminently suitable as they were three centuries ago.