The music of past ages is ours to perform as we please, and it is not the purpose of this article to be prescriptive.

Some people like to take into account information about how styles of music were performed in the past; their performances are described as "historically informed." This article aims to give such information, together with the experience of specialist West Gallery quires.

Many specialist quires find that the style of singing which suits the repertoire best is robust, open-throated and vibrato-free, often more akin to that heard in a folk club than a cathedral. Contemporary reports often refer to poor singing by some quires, but there is no reason in modern performance not to aim at good tone, intonation, diction and expression; West Gallery music can be sung well, as can all musical styles. 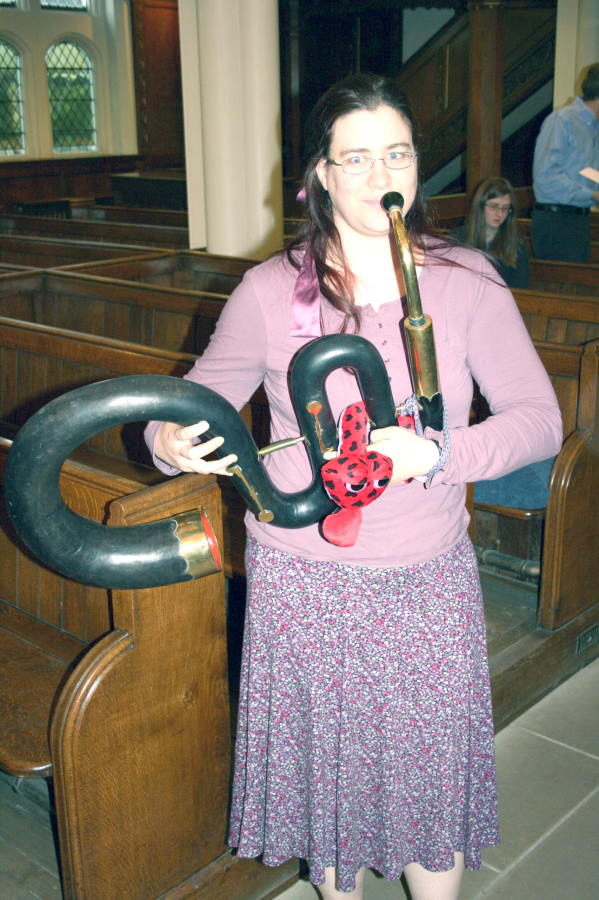 West Gallery music was sung both unaccompanied and with a variety of different instrumental accompaniments. The doubling of the air (the tenor part in earlier West Gallery pieces) at both octaves is well documented. Terms such as "solo" and "duet" often draw attention to a reduction in vocal texture rather than necessarily calling for individual voices; such a usage may be regarded as optional.

For more information about suitable instrumental accompaniment, see the article on Preparing an Event.

Many West Gallery settings benefit from being sung with rhythmic drive. West Gallery musicians were often the same as those who performed dance music at local events, as described vividly in Thomas Hardy's fiction. It is hard to believe that the rhythms of folk dances did not spill over into church performance.

West Gallery musicians used a system of time signatures to indicate tempo as well as pulse. This will not be described in detail here, as in any case it was not strictly adhered to. But it is advisable to set a tempo which will support the necessary rhythmic drive; this may be faster than in much conventional church music. Even in those pieces where a moderate or slow tempo is appropriate, there is a need for underlying rhythmic solidity.

Some settings end with written Handelian rallentandos, and it is often within the style to slow the tempo at the end of a piece. Other tempo changes are usually made only where there is a new section of music; quickening or slowing the tempo in mid-section is usually inappropriate.

Written dynamics are seldom found, and are usually limited to piano and forte. Forte is rarely found without a preceding piano, and piano usually accompanies a reduction in texture. It is therefore appropriate always to sing thin-textured passages more quietly, except in imitative or "fuguing" passages where the entries need to be clearly heard. "Chorus" is often used as an alternative to forte when restoring the original dynamic; it rarely has its modern meaning. Additional dynamics may be added where musically or textually appropriate, but any great elaboration in this respect is foreign to the style.

Slurs are used only to indicate underlay and tied notes. The text usually provides the best guide to good phrasing, which often varies from verse to verse in strophic settings. The overall style is usually within the Baroque idiom, even for pieces composed well into the 19th Century.

It is known that many quires added decorations such as passing notes, appoggiaturas and cadential trills, and also that this practice was disapproved of in some quarters. Where this is done, it is appropriate to do so within an overall Baroque idiom, (as with phrasing,) and to avoid any great elaboration.

Repeated sections and da capos are usually integral to the musical structure of West Gallery settings, and are not to be regarded as optional. Some discretion in this respect may be needed when singing a strophic setting with many verses.

In many strophic settings, pauses indicate no more than the end of a phrase, in the manner of a Bach chorale. It is advisable to use some discretion in deciding which pauses to interpret literally.

While there is little historical evidence for such practices, modern West Gallery quires often like to introduce variety of texture between verses of strophic settings. This may be done by omitting some vocal parts, or some or all of any instrumental accompaniment.

Further information about publications, workshops and other West Gallery events and activities may be found at the website of the West Gallery Music Association. Roding Music welcomes any enquiries.

No copyright is claimed in this article, which may be freely reproduced for promoting knowledge of West Gallery church music.