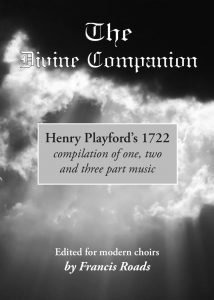 Various dates are given for the period when the West Gallery genre was in widespread use. The end of this period is particularly hard to define, because of the manner in which the genre's use petered out in the second half of the 19th Century. But I would like to put a firm date on the beginning of the West Gallery genre, namely 1701.

John Playford had already published Psalms & Hymns in solemn musick of foure parts ... in 1671, and The Whole Book of Psalms ... Composed in three parts in 1677, with many editions to follow. But in 1701 John's son Henry published The Divine Companion, ... which was "the first book to provide anthems for country choirs"1. It may be argued that metrical psalm and hymn tunes were intended as much for congregational as choir use, but that anthems are specifically intended for choirs to sing alone. The 18 anthems in the first edition are listed below. Later editions included additional anthems.

# gives an editorially supplied number.
Title gives the first few words of the anthem's text.
Composer gives the composer specified by Playford.
Text gives the psalm number and verses of the text.
Voices refers to "Cantus" (S), "Medius" (A) and "Bassus" (B).
Page shows the page number in the 1701 edition.

Click on the title to view and hear the music from a Sibelius file. If you are new to Sibelius or have any trouble with these files please look at the relevant page of Questions and Answers for more information.

The music is typeset, as was usual at this time. Cantus and Bassus parts appear together, with Medius printed separately, on an opposite right hand page where (as in most cases) the anthem is short enough. There is no figured bass, nor any indication of instrumental accompaniment.

The three-part format of most of the anthems follows that of John Playford's 1677 publication (see above). In the preface John writes: "All three parts may be as properly sung by Men, as by Boys and Women". Performance of Henry's anthems in either of these manners (SSA or TTB) would result in much overlapping of the lower two parts, but would be possible. As they stand there are large gaps in the texture between the two lower parts, and the Medius part often lies rather high for alto voices. In making performing editions of these anthems I have transposed down where necessary, often adding alternative bass notes an octave higher, and in some passages I have exchanged the upper two parts. All such emendations are noted.

Henry appears to have commissioned anthems from a number of composers active in London around the turn of the 18th Century. Some of these were composers of cathedral music, and all seem to have been active in the secular field. His requirements seem to have been precise, as the anthems are uniform in their two or three part format, their straightforward style, their lack of any need for instrumental accompaniment, and their brevity. Composers such as Croft and Jeremiah Clarke composed cathedral music, and the contrast in style with their anthems for Playford is marked.

Notes on the various composers follow. Much of the information is from Grove2 and from the Here on a Sunday Morning website3.

John Church (1674-1741) was a chorister St John's College, Oxford, and probably apprenticed to Henry Purcell (1659-95) in 1689. He sang at the Chapel Royal and Westminster Abbey, where he was Master of the Choristers from 1704-40. He composed both secular and cathedral music.

Jeremiah (Jeremy) Clarke (1674-1707) was organist at Winchester College from 1692-95. In 1699 he became a Vicar Choral at St. Pauls Cathedral, and following John Blow. William Croft and he were fellow pupils of John Blow, whom he succeeded as Master of the Choristers in 1704. He composed many secular songs, but is best remembered nowadays as composer of the Trumpet Voluntary. He is reputed to have committed suicide over a love affair.

Thomas Clarke (fl c1705) was a cousin of Jeremiah, and a composer of secular songs. He has no known relationship with Thomas Clark of Canterbury (1775-1859).

Robert King (1660-1726) was named composer-in-ordinary to William and Mary in 1689. In that year he received a licence to stage public concerts. His works include chamber music and secular songs.

William Turner (1651-1740) was a chorister at Christ Church, Oxford, and sang in the Chapel Royal in the 1660s. In 1667 he became master of choristers at Lincoln, and in 1669 he became a Gentleman of the Chapel Royal, which he remained for 71 years. He sang in St Paul's Cathedral from 1687, and in Westminster Abbey from 1699. He composed over 40 cathedral anthems, mostly before 1700. He revised the 1728 edition of Thomas Ravenscroft's The Whole Book of Psalm Tunes, in four parts. He composed many secular songs.

John Weldon (1676-1736) was a chorister at Eton. He was a pupil of Henry Purcell in 1693. He was appointed organist at New College, Oxford in 1694, and in 1702 became organist at St Bride's, Fleet St. He published both sacred and secular music, both vocal and instrumental.

All the anthems seem to fulfil their intended function well. Within the limitations set by Playford they achieve a high level of expressiveness and musical quality. All are well worthy of performance by modern choirs. Many of them continued to appear in printed compilations throughout the West Gallery period, often without attribution and/or in revised versions.

The editions listed here are for performance. Critical editions may be obtained by contacting the editor.